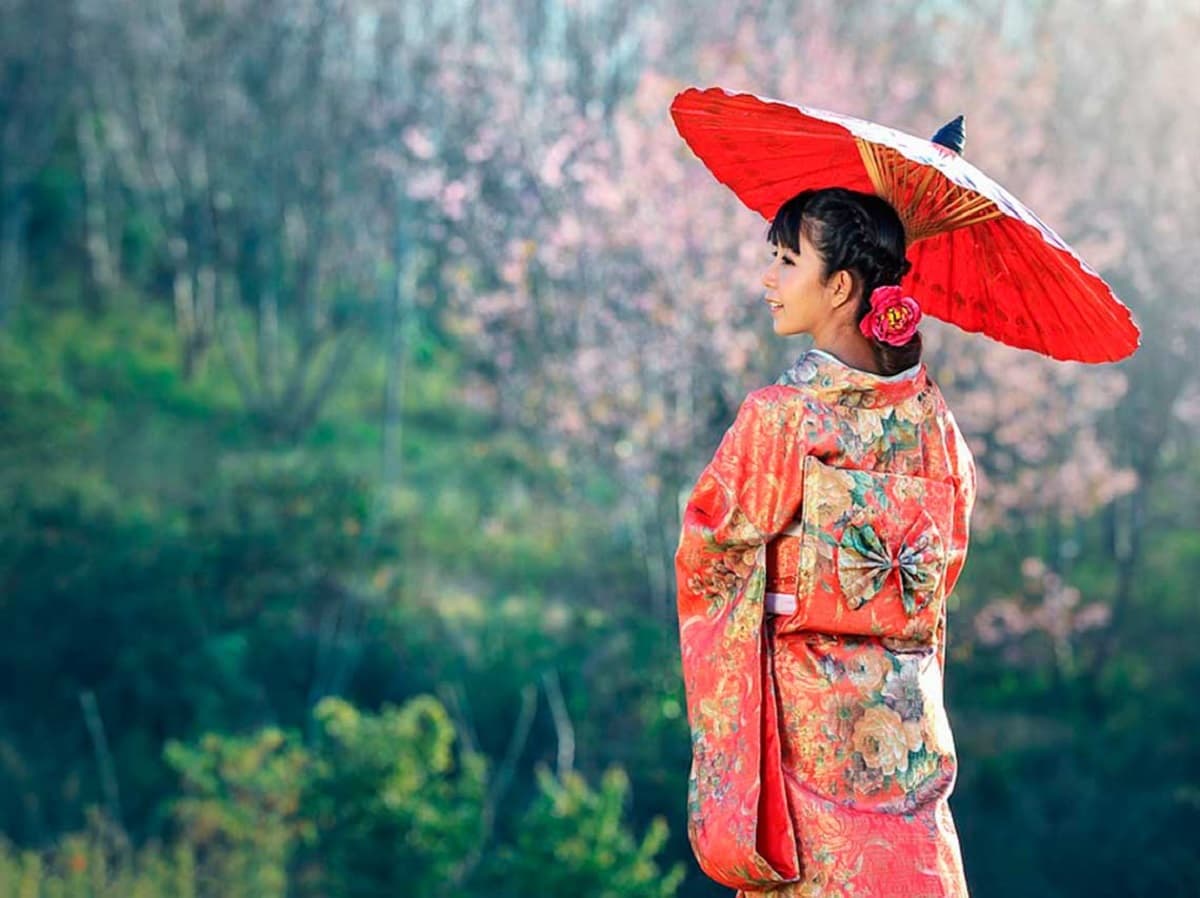 Japanese wagasa (和傘), which literally means “Japanese umbrellas,” is a well-known part of Japanese culture, having been brought to the country from China during the Heian Period (794-1185).

Wagasa odori was originally used to protect the elite from the sun and evil spirits; the color red was chosen because of its spiritual connotations. However, throughout the succeeding millennium, Japanese wagasa’s function and culture gradually shifted, culminating in the stunning artworks we admire today.

So, exactly what sets the Japanese Wagasa apart from others, and where can you get one for yourself? Let’s find out the answer in this article.

I. The History of Wagasa

During the early Heian period, the umbrellas known as Japanese wagasa, were brought to the country from China (794-1185). Since the first umbrellas in Japan originated in China, Japanese wagasa is also known as Karakasa (Chinese umbrellas).

However, many scholars believe that karakasa is an acronym of a Japanese phrase meaning “magical umbrella,” in allusion to the seemingly supernatural method in which Japanese umbrellas could be folded together and opened when necessary. Umbrellas are commonplace items, but the level of ingenuity and craftsmanship necessary to create a folding one is unusual in Japan. Wagasa japanese umbrella have come a long way from their rudimentary beginnings, and their modern design today looks very different from the original.

Traditionally, Japanese wagasa were tall parasol canopies made of bamboo and washi paper. They arrived in Japan around the 10th century, and due to their size and elaborate designs, they were reserved for the highest echelons of the feudal society.

It wasn’t until the 1400s that Japanese wagasa started to soften up enough to provide any real shelter from the heavy rains that came in the early summer. Japanese wagasa weavers began treating the canopies with waxes and vegetable oils to make them watertight around this time, allowing the umbrellas to be used in a wider range of climates.

Similarly, by the 16th century, Japanese craftsmen had developed the technology to fold the Japanese wagasa, a design that was remarkably similar to the “functioning foldable umbrella” patented by Bradford E. Philips in 1969.

In place of constant interstate slaughter, Japan entered a period of continuous calm known as the Edo Period (1603-1868). One of the most popular art forms of the time featured regular people using wagasa umbrellas to protect themselves from the rain and snow. This demonstrated how widespread use of the wagasa had become in Tokugawa Japan. There was no longer any need for the daimyo to possess such an opulent instrument (feudal lords). In order to help their respective provinces’ economies, craftspeople and deceased samurai all around Japan took up the production of Japanese wagasa, or umbrellas.

The production of umbrellas quickly increased as they became a widespread household item around the middle of the Edo period (1603-1868), when the practice of making umbrellas evolved into a series of artisan techniques. People used straw capes and caps to keep out the rain till then.

Up to the present, Japanese wagasas are a classic Japanese fashion accessory. Although umbrellas and hats served a very functional purpose by shielding their wearers from the elements, the Japanese umbrella has also been a staple of the tea ceremony, kabuki, and other aspects of traditional Japanese culture for generations. In all likelihood, Japan is one of the few nations that can lay claim to such an illustrious and unique umbrella culture.

Japanese wagasas are eco-friendly because they’re manufactured from renewable materials, and they’re also beautiful in an understated, traditional Japanese way.

Because of the umbrella’s protective oil coating, the paper has extra strength; but, after prolonged use, the paper becomes inflexible and easy to break, indicating that it has completed its useful life span and must be replaced. Even while most modern buyers treat Japanese parasols as decorative accessories, Japanese wagasas are sturdy and can endure for up to 20 years with proper maintenance; the paper can even be repaired if necessary. It’s not just for when it’s pouring outside; they also block the sun in the summer.

It is sturdy but often requires great care, as it is made primarily of Japanese paper, bamboo, and string. Notably for the fragile paper that could easily shatter under the right conditions. For instance, rain can easily damage a Japanese wagasa parasol because it is not treated with oil, yet the paper stays flexible and lasts longer.

There are numerous ways in which the Wagasa vary from their western counterparts:

III. How traditional Japanese Wagasa Umbrellas Are Made?

It takes a lot of time and effort because Wagasa is created entirely by hand, with the technique named Dobari. These umbrellas may serve a practical purpose, but they are also regarded works of art and can fetch $300 to $3,000. However, the umbrella won’t sell if the paper is off by even a tiny amount. So, how to make wagasa?

To make a Japanese Wagasa, you must first find organic bamboo. Artisan collaborates with a number of bamboo suppliers, who smooth it out and then slice it into thin sticks. After the bamboo is ready, the artisan sews the sticks together around a temoto rokuro – a wooden core. This lays the groundwork for further development.

Each bamboo or bone cane is around 2-3 millimeters in diameter. However, the total quantity of bones they employ is not constant across all wagasa varieties. The term “bangasa” is used to refer to vessels of this type. To function, it requires 48 bones to be joined together at the midsection.

In the following step, they use a needle and thread to join the bones together. This phase has always been one of the most important ones. An umbrella that doesn’t open and close properly or that tears after only a few uses is a sign that the bones weren’t placed uniformly.

Next, the craftsman goes through series of steps of shaping the umbrellas. First, the artisan prepares a tapioca paste to use as adhesive. Since there is glue on the frame, you must press exactly in that spot by hand one time. The glue will remain on the washi if it needs to be repositioned, and it will be noticeable in the final product. The store will be unable to sell it if it is  placed wrongly. Therefore, you need to locate the optimal starting point and timing only once.

Then, they use a razor to cut off the excess washi, so the paper doesn’t overlap anywhere on the umbrella. All the ribs of the umbrella need to be treated in this way. They had to leave the glue on the umbrella overnight. The next day, it’s shaped perfectly, so opening and closing the umbrella is a breeze.

Because the paper needs to be folded into the wagasa sticks, as opposed to Western umbrellas, Japanese wagasa are folded within the umbrella before being twisted. To finish off the umbrella’s “potter’s wheel” motif, artisan wraps extra washi paper around its peak. But instead of using glue, he uses water to keep the paper in place.

In Japan, wagasa is typically worked on by a large team of specialists, each of whom is an expert in a different part of the process. Additionally, the art form is often handed down from one generation to the next within a family.

Lastly, putting a coat of linseed oil on the umbrella to make it watertight. At least two weeks must pass between when the umbrellas are taken indoors to finish drying and when any decorations are added.

Here are the summary of all the steps:

Indeed, the original umbrellas were reserved for the Imperial family and other nobility since it was believed that they possessed magical properties capable of warding off evil spirits and bad luck; the color red was selected for this reason.

When not in use, your Japanese wagasa should be kept untied and loose in a cool, dry, dark place with plenty of ventilation. After each use, make sure to give it a thorough drying off, preferably with a towel. It’s preferable to let it dry up fully before opening. Once it’s dried, you may keep it in a dark, airy place with a sloppy seal. Sunlight can fade the Wagasa’s designs and colors, therefore air drying is recommended.

Finally, if your Wagasa umbrella is damaged, you can get it fixed, however the cost may exceed the purchase price of a new umbrella. There aren’t many skilled craftspeople around to make these fixes. When an umbrella’s ribs are damaged, it can’t be fixed.

IV. Where to buy Wagasa umbrellas?

You can pick up Japanese wagasas just about anywhere in Japan. However, with the revolution of the Internet, you can now shop online at a numerous range of Japanese local stores or Japanese e-commerce platforms without spending time and efforts to transport. Obviously, Japanese local stores are the best place to look online for a Japanese wagasa, as they offer authentic handmade crafts and sell as a Wagasa specialized store. However, there are still possible options if you are living abroad, such as Wagasa umbrella Amazon Japan, Yahoo! Japan, Rakuten,…

We hope that this post has been helpful in answering your questions regarding Japanese Wagasa and where to find them independent. However, before you go Wagasa shopping there, make sure you’re ready to deal with language barriers and wait a long time. Janbox is the location to go for if you don’t want to run into these kinds of problems. Due to our superior service, you can anticipate receiving Japanese products quickly.